Things to do in Edinburgh, GB

Arthur's Seat is the main peak of the group of hills in Edinburgh, Scotland which form most of Holyrood Park, described by Robert Louis Stevenson as "a hill for magnitude, a mountain in virtue of its bold design".

In 1456, James II granted land to Edinburgh by charter wherein Calton Hill is referred to as "Cragingalt", the name by which it appears on the 1560 Petworth map of the Siege of Leith (rendered as "Cragge Ingalt"). The name may have derived from Old Welsh or Old English meaning "the place of the groves". 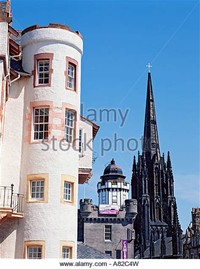 The camera obscura in the Outlook Tower at the top of the Royal Mile, next to the castle was established in the 1850's ... Edinburgh, United Kingdom (GB) ...

Castle Rock is a volcanic plug in the middle of Edinburgh upon which Edinburgh Castle sits. The rock is estimated to have formed some 350 million years ago during the early Carboniferous period. It is the remains of a volcanic pipe which cut through the surrounding sedimentary rock, before cooling to form very hard dolerite, a coarser-grained equivalent of basalt.

Step inside Edinburgh’s ‘other castle’, which stood a mile outside the old city walls, providing a retreat from Scotland’s capital. Craigmillar Castle was close to the political cauldron of Edinburgh, but pleasingly separate from it. Mary Queen of Scots famously used the castle as a safe haven in 1566.

Dugald Stewart The Dugald Stewart Monument is a memorial to the Scottish philosopher Dugald Stewart (1753–1828). It is situated on Calton Hill overlooking the city of Edinburgh and was designed by Scottish architect William Henry Playfair.

Visit Edinburgh's famous castle for a great family day out in Scotland. Book your tickets online now and beat the queues.

The Edinburgh Vaults or South Bridge Vaults are a series of chambers formed in the nineteen arches of the South Bridge in Edinburgh, Scotland, which was completed in 1788. For around 30 years, the vaults were used to house taverns, workshops for cobblers and other tradesmen, as well as storage space for said merchants.

Edinburgh Waverley railway station (also known simply as Waverley) is the principal station serving Edinburgh, the capital city of Scotland. It is the northern terminus of the East Coast Main Line, 393 miles 13 chains (632.7 km) from London King's Cross, although some trains operated by Virgin Trains East Coast continue to other Scottish destinations beyond Edinburgh.

Edinburgh Zoo is kind of a little steep hill but I had a nice walk around it and took some photos. Can’t believe I spent 4 hours in the zoo, however there are plenty to see and they do hold talk sessions of the animals too.

The firth is important for nature conservation and is a Site of Special Scientific Interest. The Firth of Forth Islands SPA (Special Protection Area) is home to more than 90,000 breeding seabirds every year. There is a bird observatory on the Isle of May.

The Forth Bridge is a cantilever railway bridge across the Firth of Forth in the east of Scotland, 9 miles (14 kilometres) west of Edinburgh City Centre. It is considered an iconic structure and a symbol of Scotland (having been voted Scotland's greatest man-made wonder in 2016), and is a UNESCO World Heritage Site. 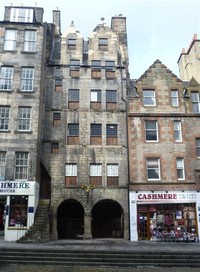 Gladstone's Land is a surviving 17th-century high-tenement house situated in the Old Town of the city of Edinburgh, Scotland. It has been restored and furnished by the National Trust for Scotland, and is operated as a popular tourist attraction.

Greyfriars Kirkyard is the graveyard surrounding Greyfriars Kirk in Edinburgh, Scotland.It is located at the southern edge of the Old Town, adjacent to George Heriot's School.

Heart of midlothian supporters, Edinburgh, United Kingdom. 3,276 likes · 63 talking about this. place for all the jambos to let off some steam and have a...

The Royal Yacht Britannia was home to Her Majesty The Queen and the Royal Family for over 40 years, sailing over 1,000,000 miles around the world. Now berthed in Edinburgh, you can follow in the footsteps of Royalty to discover the heart and soul of this most special of Royal residences.

Holyrood Abbey is a ruined abbey of the Canons Regular in Edinburgh, Scotland. The abbey was founded in 1128 by King David I. During the 15th century, the abbey guesthouse was developed into a royal residence, and after the Scottish Reformation the Palace of Holyroodhouse was expanded further.

Located at the bottom of the Royal Mile in Edinburgh, at the opposite end to Edinburgh Castle, Holyrood Palace has served as the principal residence of the Kings and Queens of Scots since the 16th century, and is a setting for state occasions and official entertaining.

Inchcolm lies in the Firth of Forth off the south coast of Fife opposite Braefoot Bay, east of the Forth Bridge, south of Aberdour, Fife, and north of the City of Edinburgh. It is separated from the Fife mainland by a stretch of water known as Mortimer's Deep.

John Knox House, popularly known as "John Knox's House", is a historic house in Edinburgh, Scotland, reputed to have been owned and lived in by Protestant reformer John Knox during the 16th century. 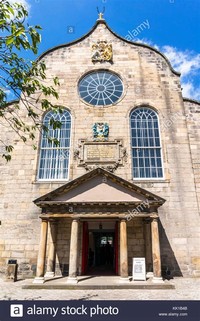 The Canongate Churchyard is the resting place of several Edinburgh notables including the economist Adam Smith, the philosopher and Smith's biographer Dugald Stewart, Agnes Maclehose (the "Clarinda" of Robert Burns), by tradition David Rizzio, the murdered private secretary of Mary, Queen of Scots, and the poet Robert Fergusson, whose statue in bronze by David Annand stands outside the kirk gate.

Mary King's Close is a historic close located under buildings on the Royal Mile, in the historic Old Town area of Edinburgh, Scotland. It took its name from one Mary King, a merchant burgess who resided on the Close in the 17th century.

The Museum of Childhood is a collection of children's toys and playthings, situated on the Royal Mile, in Edinburgh, Scotland. It was the first museum in the world to specialise in the history of childhood.

Discover Edinburgh’s fascinating history through the Museum of Edinburgh’s wide and varied collections. In exploring the Museum’s maze of 16th century buildings, you will see iconic items, beautiful objects and learn fascinating facts and gruesome tales.

National Museum of Scotland Our diverse collections will take you on a journey of discovery through the history of Scotland and around the world, taking in the wonders of nature, art, design and fashion and science and technology – all under one roof.

The National Monument of Scotland, on Calton Hill in Edinburgh, is Scotland's national memorial to the Scottish soldiers and sailors who died fighting in the Napoleonic Wars. It was intended, according to the inscription, to be "A Memorial of the Past and Incentive to the Future Heroism of the Men of Scotland".

The National War Museum, situated within Edinburgh Castle, is Scotland’s national war museum reflecting over 400 years of Scotland at war, which due to its strategic position, has suffered through many years of conflict.

Steeped in history and majesty, Princes Street is a mecca of top retail brands with pub-packed Rose Street on one side and the beautiful Princes Street Gardens along the other. Across the road is The Mound, connecting Princes Street to Old Town, with Edinburgh Castle and the famous Royal Mile just a short (but steep) 15 minute walk. 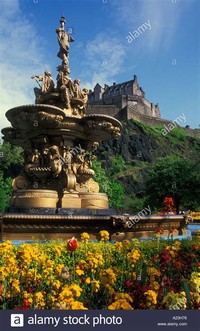 Rosslyn Chapel, formally known as the Collegiate Chapel of St Matthew, is a 15th-century chapel located in the village of Roslin, Midlothian, Scotland. Rosslyn Chapel was founded on a small hill above Roslin Glen as a Catholic collegiate church (with between four and six ordained canons and two boy choristers) in the mid-15th century. 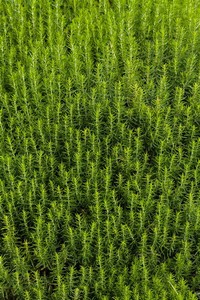 In extreme weather the Gardens may close - call 0131 248 2909 to check before you visit. Due to strong wind speeds the Edinburgh Garden is closed today, Thursday 14 June. Click here to view our latest job vacancies.

The Scott Monument is a Victorian Gothic monument to Scottish author Sir Walter Scott. It is the second largest monument to a writer in the world after the Jose Marti monument in Havana. It stands in Princes Street Gardens in Edinburgh, opposite the Jenners department store on Princes Street and near to Edinburgh Waverley Railway Station, which is named after Scott's Waverley novels.

The Scottish National Portrait Gallery is one of Edinburgh’s most remarkable buildings – a great red sandstone neo-gothic palace which sits proudly on the city’s skyline. The Gallery was designed by Sir Robert Rowand Anderson as a shrine for Scotland’s heroes and heroines.

St Andrew Square is a city square in Edinburgh, Scotland located at the east end of George Street. The construction of St Andrew Square began in 1772, as the first part of the New Town, designed by James Craig. 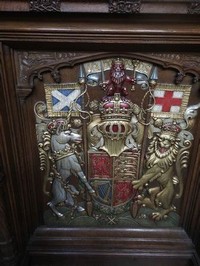 St Giles’ Cathedral is the historic City Church of Edinburgh. With its famed crown spire it stands on the Royal Mile between Edinburgh Castle and the Palace of Holyroodhouse. Also known as the High Kirk of Edinburgh, it is the Mother Church of Presbyterianism and contains the Chapel of the Order of the Thistle.

St Margaret's Chapel, in Edinburgh Castle, is the oldest surviving building in Edinburgh, Scotland. An example of Romanesque architecture, it is a category A listed building. It was constructed in the 12th century, but fell into disuse after the Reformation. 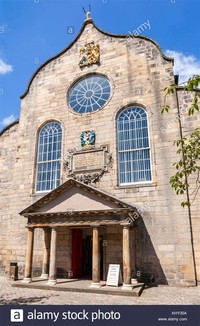 The Canongate forms part of what is now called the 'Royal Mile' running from Edinburgh Castle down to Holyrood Palace. Moray House, now part of the University of Edinburgh, occupies a number of properties on the south side of this historic street. This section describes the colourful history and development of this area.

The Union Canal is a canal in Scotland, running from Falkirk to Edinburgh, constructed to bring minerals, especially coal, to the capital. It was opened in 1822 and was initially successful, but the construction of railways, particularly the Edinburgh and Glasgow Railway, which opened in 1842, diminished its value as a transport medium. 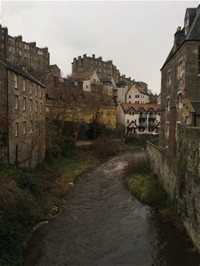 The Water of Leith is the main river flowing through Edinburgh, Scotland, to the port of Leith where it flows into the sea via the Firth of Forth. It is 35 km (22 mi) long and rises in the Colzium Springs at Millstone Rig of the Pentland Hills. 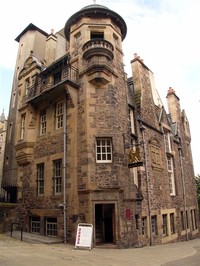 **** Please Note: The Writers' Museum will be closed between 12pm and 3pm on Thursday 14 June for a private event. We apologise for any inconvenience this may cause **** The Writers’ Museum celebrates the lives of three giants of Scottish Literature – Robert Burns, Sir Walter Scott and Robert Louis Stevenson.