Things to do in Glasgow, GB 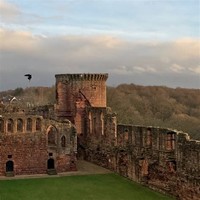 Bothwell Castle is a large medieval castle sited on a high, steep bank, above a bend in the River Clyde, in South Lanarkshire, Scotland. It is located between Bothwell and Uddingston, about 10 miles (16 km) south-east of Glasgow.

The Burrell Collection is an art collection in the city of Glasgow, Scotland. It is situated in Pollok Country Park on the south side of the city. The museum closed for refurbishment on 23 October 2016 and is expected to reopen in 2020.

CCA is Glasgow’s hub for creative activity. The building is steeped in history and the organisation has played a key role in the cultural life of the city for decades. We are proud to contribute to the vibrancy and vitality of Scotland’s exciting arts scene.

Clyde Arc The Clyde Arc (known locally as the Squinty Bridge), is a road bridge spanning the River Clyde in Glasgow, in west central Scotland, connecting Finnieston, near the Clyde Auditorium and SEC with Pacific Quay and Glasgow Science Centre in Govan.

The Forth and Clyde Canal, which runs sea-to-sea between the two rivers, has passed through Glasgow since the eighteenth century, though it ceased to be navigable in 1963. However, the multi-million Millennium Link Project saw it reopen in 2000/2001.

Situated in the heart of the City Centre, GoMA is Scotland's most visited modern art gallery displaying work that highlights the interests, influences and working methods of artists from around the world. 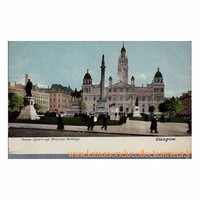 George Square is the principal civic square in the city of Glasgow, Scotland. It is named after King George III. Laid out in 1781, George Square is surrounded by architecturally important buildings including on the east side the palatial Municipal Chambers, also known as the City Chambers, whose foundation stone was laid in 1883.

The Friends of Glasgow Botanic Gardens have a simple wish – that you enjoy the Gardens as much as we do. You may be our next door neighbours or a visitor to Glasgow or live on the other side of the world – it matters not – please enjoy your time in the Gardens, whether physically or digitally. We hope that this site will stimulate you to visit the Gardens and give you the information required. 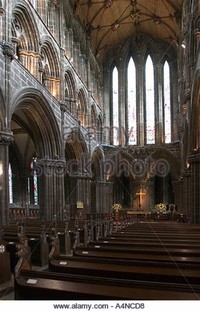 Glasgow Cathedral, also called the High Kirk of Glasgow or St Kentigern's or St Mungo's Cathedral, is today a gathering of the Church of Scotland in Glasgow.

This opened on 2nd May 1974 as the Glasgow Film Theatre with Frederico Fellini’s "Roma". In 1988, the conference room was converted into a 144 seat cinema and a cafe known as the Cosmo Cafe was added. The former circle cinema now seats 394. On 21st July 1988, Historic Scotland designated the Cosmo Cinema a Grade B Listed building.

Glasgow Green is a park in the east end of Glasgow, Scotland on the north bank of the River Clyde. Established in the 15th century, it is the oldest park in the city.

The Glasgow Necropolis is a Victorian cemetery in Glasgow, Scotland. It is on a low but very prominent hill to the east of Glasgow Cathedral (St. Mungo's Cathedral). Fifty thousand individuals have been buried here. 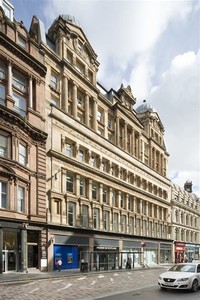 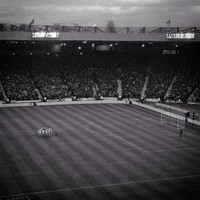 Hampden Park (often referred to as Hampden) is a football stadium in the Mount Florida area of Glasgow, Scotland. The 51,866-capacity venue serves as the national stadium of football in Scotland. It is the normal home venue of the Scotland national football team and amateur Scottish league club Queen's Park F.C. and regularly hosts the latter stages of the Scottish Cup and Scottish League Cup competitions.

Whether it’s a business lunch or dinner, meeting space or a team building day that no one will forget, House for an Art Lover can provide you with the facilities you need to make your event a success.

The University of Glasgow's Hunterian is the oldest museum in Scotland. It covers the Hunterian Museum, the Hunterian Art Gallery, the Mackintosh House, the Zoology Museum and the Anatomy Museum, all located in various buildings on the main campus of the University in the west end of Glasgow.

Glasgow Merchant City Ingram Street This is a Preferred property. It provides excellent service, great value and has brilliant reviews from Booking.com guests. The property may pay Booking.com a bit more to be in this programme.

The Kelvin Hall in Argyle Street Glasgow, Scotland, is one of the largest exhibition centres in Britain and now a mixed-use arts and sports venue that opened as an exhibition venue in 1927. It has also been used as a concert hall, home to the Kelvin Hall International Sports Arena to 2014, and from 1987 to 2010, Glasgow's Museum of Transport.

The park is 34 hectares (85 acres) in size, and located in the West End of Glasgow. It straddles the River Kelvin shortly before the river's confluence with the Clyde, and as such is an urban haven for wildlife.

The architects of what originally was known as ‘The Kibble Crystal Art Palace,’ were John Boucher and James Cousland. In 1871 Kibble entered into negotiations to have the structure dismantled and moved by barge to Glasgow where it was to be reconstructed in the Botanic Gardens. 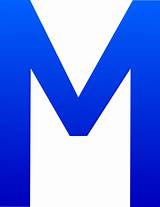 Glossary of terms that have been discussed or mentioned on these pages. Letter M

Wonderfully knowledgeable guides on each floor of the Mackintosh house...amazing that such a place could have been created at such a time - bravo to the community of artists that formed around the Glasgow School of Art.

The National Piping Centre · 14 hrs · If you are a school leaver, unsure what to do, or looking for a career change and to develop your piping, our HNC course could be for you.

ODEON Luxe Glasgow Quay ... get set to lose yourself in the film ahead with food from around the world at one of our neighbour restaurants in the Springfield Quay ... 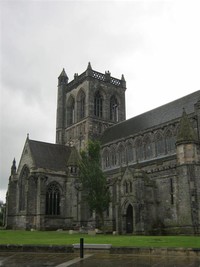 Paisley Abbey is a former Cluniac monastery, and current Church of Scotland Protestant parish kirk, located on the east bank of the White Cart Water in the centre of the town of Paisley, Renfrewshire, about 12 miles (19 km) west of Glasgow, in Scotland

The People's Palace and Winter Gardens in Glasgow, Scotland is a museum and glasshouse situated in Glasgow Green, and was opened on 22 January 1898 by the Earl of Rosebery.

Pollok House is a Georgian building built in 1752 with many fine paintings, and Pollok Country Park was chosen to house the "Burrell Collection" in a modern contemporary and clean air green space. It is the largest park in Glasgow.

The Kelvin flowing under the Clydeside Expressway and into the River Clyde The River Kelvin is a tributary of the River Clyde in northern and northeastern Glasgow, Scotland. It rises on the moor south east of the village of Banton, east of Kilsyth.

At Riverside Museum there is a recreated street from 1895 - 1930, plus two additional display areas depicting shops from the 1930s, right through to the 1980s, giving visitors a fantastically detailed insight into Glasgow's distant and more recent past.

As one of Glasgow’s Leading Attractions, The Hampden Experience is an ideal day out for families, avid football fans and novices eager to gain knowledge of Scottish football. The museum is home to the world’s most impressive national collection of football related objects, memorabilia and ephemera.

The SEC Armadillo is a stylish, purpose-built venue and a Glasgow landmark. It was designed by world-renowned architects Foster + Partners and when it opened in 1997 it heralded a new era for the SEC and Glasgow’s vibrant waterfront.

OPENING TIMES - Soar at intu Braehead Our doors are open 364 days a year – the only day we close is Christmas Day! The main doors open at 8am, for those early birds who want to enjoy the fresh snow from 9am, and the centre stays open until midnight (licensed premises) most nights and sometimes even later at weekends for those party animals who want to make the most of their time inside.

St Mungo Museum of Religious Life is a fantastic venue for corporate dinners, meetings, receptions and other private events. The venue can also be used as a film and tv location. Please visit our venue hire for more information. ‘Away for the Day with Glasgow Museums’ is a booklet full of free family fun.

Summerlee Museum of Scottish Industrial Life, formerly known as Summerlee Heritage Park, is an industrial museum in Coatbridge, North Lanarkshire, Scotland. It was built on the site of the Victorian Summerlee Iron Works and incorporated the main workshop of the former Hydrocon Crane factory. The museum is managed by CultureNL Ltd.

If you want to experience the under belly of Glasgow you have to visit the "The Barras" Weekend Market. A miss-mash of all sorts of things - antiques, collectibles, new clothes etc. hidden in all sorts of nooks and crannies and if you are lucky...

Information on The Lighthouse, Glasgow. Scotland's national centre for design and architecture

Inspired by the works of Charles Rennie Mackintosh, the tea rooms are modelled on Kate Cranston's Ingram Street Tea Rooms from the early 1900s.

Would you rather live in Glasgow or Dublin?
How bad is sectarianism in Glasgow today?
Why are Glasgow gangs more violent than the rest of UK gangs?
Did Glasgow ever have city walls?
How many fried Mars Bars are sold in Glasgow every year?
What is the best pub in Glasgow?
Which is better for living: Glasgow or Munich?
Where is the best place to live: Glasgow, Manchester or Leeds?
What are the must see places in Glasgow, UK?
Which city should I study in Glasgow or Edinburgh?