Things to do in Köln, DE

The Brühl palaces, Augustusburg as the main building and Falkenlust as a hunting lodge and refuge, impressively demonstrate the then extravagant life at the court of the Electors – and Cologne archbishops. Nature lovers will possibly prefer to take a look at the extensive baroque gardens and park.

The Basilica of St. Cunibert also St. Kunibert (German pronunciation: [ˌzaŋt ˈkuːniˌbɛʁt], Colognian (Kölsch) pronunciation: [ˌtsɪnt ˈkʊnɪˌbɛːt]) is the last of Cologne's twelve Romanesque churches to be built. It was consecrated 1247, one year before work on the Gothic Cologne Cathedral began.

The Basilica church of St. Ursula (German pronunciation: [ˌzaŋt ˈʔuʁˌzula], Colognian (Kölsch) pronunciation: [ˌtsɪnt ˈʔoʒəla]) is located in Cologne, North Rhine-Westphalia, Germany. It is built upon the ancient ruins of a Roman cemetery, where the 11,000 virgins associated with the legend of Saint Ursula are said to have been buried. 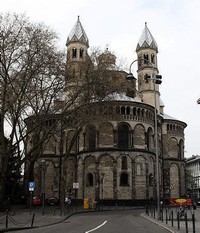 The Basilica of the Holy Apostles (German: Basilika St. Aposteln, German pronunciation: [ˌzaŋt ʔaˈpɔstl̩n], Colognian (Kölsch) pronunciation: [ˌtsɪnt ʔaˈpɔsˑtəl])) is a Romanesque church in Cologne (Köln), located near Innenstadt's busy Neumarkt. The former collegiate church is dedicated to the twelve Apostles. It is one of the twelve Romanesque churches built in Cologne in that period.

The Beethoven Monument is a large bronze statue of Ludwig van Beethoven that stands on the Münsterplatz in Bonn, Beethoven's birthplace. It was unveiled on 12 August 1845, in honour of the 75th anniversary of the composer's birth.

For technical reasons the Cologne funicular is currently out of Service. The cable car offers you the most attractive bird's-eye view of the city. Take a leisurely trip across "Old Father Rhine" and admire the city's fascinating panorama.

Cologne Cathedral. Construction of Cologne Cathedral commenced in 1248 and was halted in 1473, leaving it unfinished. Work restarted in the 19th century and was completed, to the original plan, in 1880. The cathedral is the largest Gothic church in Northern Europe and has the second-tallest spires.

The City Hall (German: Kölner Rathaus) is a historical building in Cologne, western Germany. It is located off Hohe Straße in the district of Innenstadt, and set between the two squares of Rathausplatz and Alter Markt. It houses part of the city government, including the city council and offices of the Lord Mayor.

The Aktiengesellschaft Cologne Zoological Garden is the zoo of Cologne, Germany.It features over 7,000 animals of more than 700 species on more than 20 hectares.The internationally renowned zoo with an attached aquarium and invertebrate exhibit has an emphasis on primates such as bonobos and lemurs, and is active in preservational breeding of ... 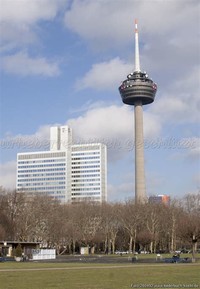 Colorado Adventure. Gold fever is raging in the Colorado Mountains. There is a tireless and feverish search for the precious metal in the mines.

Cologne Cathedral (German: Kölner Dom, officially Hohe Domkirche Sankt Petrus, English: Cathedral Church of Saint Peter) is a Catholic cathedral in Cologne, Northrhine-Westfalia, Germany. It is the seat of the Archbishop of Cologne and of the administration of the Archdiocese of Cologne. 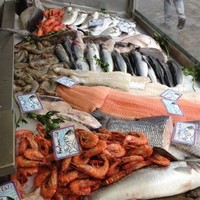 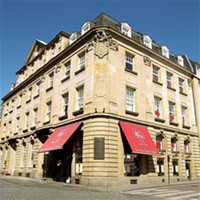 The Farina Fragrance Museum is situated across from Cologne City Hall, and near the famous Wallraf-Richartz-Museum in the Obenmarspforten in Innenstadt, Cologne. Founded in 1709, John Maria Farina opposite the Jülichs Place is the eldest fragrance factory still standing and houses the registered office since 1723. 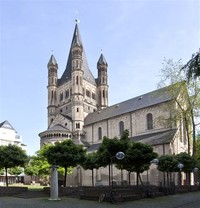 The story of Great St. Martin is inextricably connected to that of the Benedictine abbey, located at the church for most of its history. A few documents from the time of the building have survived, and it is from these that knowledge of its founding comes.

The Hohenzollern Bridge (German: Hohenzollernbrücke) is a bridge crossing the river Rhine in the German city of Cologne (German: Köln). It crosses the Rhine at kilometre 688.5. Originally, the bridge was both a railway and road bridge. However, after its destruction in 1945 and its subsequent reconstruction, it was only accessible to rail and pedestrian traffic.

KölnTriangle (formerly also known as LVR-Turm) is a 103.2 metres (339 ft) tall building in Deutz, Cologne, and a prominent landmark in Cologne. The building was designed by Dörte Gatermann of Cologne-based architecture firm Gatermann + Schossig and completed in 2006.

The Kolumba is a museum in Köln / Cologne primarily focused on ancient and modern art, housed in a famous building designed by Swiss architect Peter Zumthor

Königsforst in Cologne, reviews by real people. Yelp is a fun and easy way to find, recommend and talk about what’s great and not so great in Cologne and beyond.

This market is located in the Cologne's 'Altstadt' (the old town) on the Alter Markt and calls itself the Home of the Heinzelmännchen (who were little creatures from a Cologne legend who used to do all the housework until they were annoyed by an inquisitive housewife).

The theme park Phantasialand next to Cologne offers fun and adventure for the whole family with its unique attractions and shows.

As early as in 1912, the park was landscaped for an exhibition and later extended in 1914 and 1928. In the aftermath of World War II, the Rheinpark was enlarged to its today dimensions on occasion of the first Federal Garden Show in Cologne. On occasion of its 50th anniversary, the park was nominated “The most beautiful German Park” in 2007.

Praetorium - Roman Governor's Palace The Praetorium was the official residence of the Imperial Governor of Cologne, the capital city of the Roman province of Lower Germania. It is the city's most significant official monument and the most important Roman palace on the banks of the Rhine.

ROMANO-GERMANIC MUSEUM. The Roman mosaic with scenes from the world of Dionysos (c.AD 220/230) and the reconstructed funerary monument to the legionary Poblicius (c.AD 40) are probably the best-known exhibits in Cologne's Romano-Germanic Museum.

Schildergasse is Cologne's most popular shopping street and also one of the most-visited shopping streets in Germany. Its highlight is the Weltstadthaus, which resembles a huge glass whale. Inside the "whale" is the Peek & Cloppenburg clothing store.

The Shrine of the Three Kings (German Dreikönigsschrein) is a reliquary containing the bones of the Biblical Magi, also known as the Three Kings or the Three Wise Men. The shrine is a large gilded and decorated triple sarcophagus placed above and behind the high altar of Cologne Cathedral. 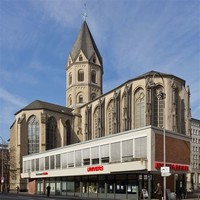 St. Andrew's (German: St. Andreas) is a 10th-century Romanesque church located in the old town of Cologne, Germany. It is one of twelve churches built in Cologne in that period. Archbishop Gero consecrated the church in 974, dedicating it to St. Andrew, although an earlier church at the site was dedicated to St. Matthew. 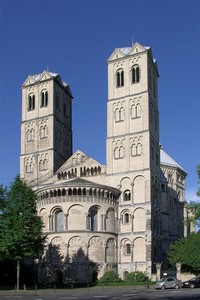 St. Gereon's Basilica (Basilika Sankt Gereon) is a Roman Catholic church in Cologne, Germany, dedicated to Saint Gereon, and designated a minor basilica on 25 June 1920. The first mention of a church at the site, dedicated to St. Gereon, appears in 612.

St. Maria im Kapitol (St. Mary's in the Capitol) is an 11th-century Romanesque church located in the Kapitol-Viertel in the old town of Cologne, Germany. The Roman Catholic church is based on the Church of the Nativity in Bethlehem, was dedicated to St. Mary and built between 1040 and 1065.

Petersglocke, with person for scale Saint Peter's bell (orig. German: St. Petersglocke, referred to in the Colognian language as Decke or Dekke Pitter and in common parlance as Dicker Pitter i.e. Fat or Big Peter) is the largest bell in Cologne Cathedral. 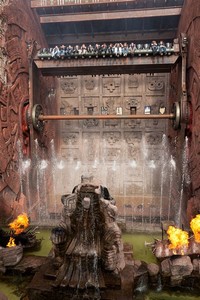 Watch and see the great Suspended Top Spin Talocan in Phantasialand (Bruhl, Germany). Talocan is a modern version of a common ride. Video mixed from 4 different kinds of angles! Talocan …

Only a very small proportion of the exhibits are on display in the permanent exhibition of the museum. Thematic focal points are: Olympic Games, German gymnastics, sport in Classical Antiquity, sport in Cologne, sport and art, and important developments in the world of sport.