Things to do in Korba, IN

Tell us about a temple * Mandatory fields. Name of Temple * About the Temple * Your Experience * Significance * Deity category *

Kanki is a renowned for lord Shiva temple which is located in this region. It is also known as Kankeshwar Mahadev Temple. The idols of the Lord Ganesh and Goddess Parvati can also be found in the temple. This particular temple is famous for the exquisitely carved images of Gods and Goddesses.

A shamshan ghat is a platform designed for the cremation of bodies. Typically, it is built near rivers or fresh streams so that ashes can be disposed of after cremation in accordance with Hindu tradition. 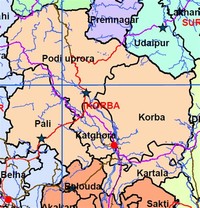 Madwarani Mandir, dedicated to Goddess Madwarani, is situated on the Korba-Champa Road. It is located on the top of a hill. Every year during the Navratri festival, a fair is held by the local people here.

History of Korba Chhattisgarh: Korba was last ruled by Rani Dhanraj Kunwar Devi. Earlier, rulers belonging to the Haihaya dynasty reigned over the region during 106 AD. Later, the city of Korba came under the influence of The Marathas.