Things to do in Lahore, PK

The Akbari Sarai (Urdu: اکبری سرائے ‬ ‎) is a large caravan inn ("sarai") that is located in Shahdara Bagh in Lahore, Punjab, Pakistan. Dating from 1637, the sarai was originally built for travelers, as well as for caretakers of the Tomb of Jahangir.

The Lahore Fort (Punjabi and Urdu: شاہی قلعہ ‬ ‎: Shahi Qila, or "Royal Fort"), is a citadel in the city of Lahore, Pakistan. The fortress is located at the northern end of Lahore's Walled City, and spreads over an area greater than 20 hectares.

The Badshahi Mosque (Punjabi and Urdu: بادشاہی مسجد ‬ ‎, or "Imperial Mosque") is a Mughal era mosque in Lahore, capital of the Pakistani province of Punjab. The mosque is located west of Lahore Fort along the outskirts of the Walled City of Lahore, and is widely considered to be one of Lahore's most iconic landmarks.

Bagh-e-Jinnah (Punjabi, Urdu: باغ جناح ‬ ‎) (or Jinnah's Garden) is a historical park in the city of Lahore, Pakistan. It was formerly known as Lawrence Gardens (لارنس گارڈن ‬).

This baradari (literally, 12-door pavilion) originally served as the centerpiece of the Nakhlia Garden built by Wazir Khan, a benefactor of numerous buildings throughout Lahore including the mosque and hammam (bath house) which bear his name.

Bhati Gate (Urdu: بھاٹی دروازه ‬ ‎, Bhati Darwaza) is one of the historic thirteen gates of the Walled City of Lahore in Lahore, Punjab, Pakistan. Bhati Gate also serves as a union council located in the Ravi Zone.

Chauburji is located at the Multan road Lahore. Chauburji is one of the oldest and famous monuments among the structures and buildings of the Mughal era in the city of Lahore. It is the very popular place among the tourist of Lahore city who are willing to explore Lahore city.

Data Darbar (also spelt Data Durbar; Urdu: داتا دربار ‬ ‎), located in the city of Lahore, Punjab, Pakistan is the largest Sufi shrine in South Asia. It was built to house the remains of the Muslim mystic, Abul Hassan Ali Hujwiri, commonly known as Data Ganj Baksh, who is believed to have lived on the site in the 11th century CE.

The gate was named after Delhi since the gate opened east, in the general direction of that city. During the Mughal era, the gate served as the main gateway to Lahore, and its doors were shut every evening. 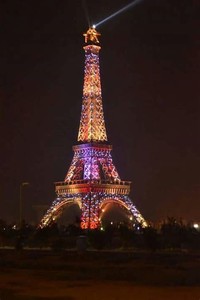 The Blackpool Tower, though one of the oldest, is not a true replica of the Eiffel Tower and differs from the Paris tower in a number of ways: it is approximately half the height of the Eiffel Tower (158 m compared to 324 m), it is not freestanding and the base contains buildings which house entertainments including the Tower Circus and Ballroom, making it in itself one of the most unique replica-like Towers in the world.

Fakir Khana (Urdu: فقیر خانہ ‬ ‎) is a private museum and house located in Lahore, Pakistan, owned by the Fakir family. The museum contains over 20,000 objects, and is the largest privately-owned museum in South Asia.

Fort Road (Urdu: سارک قلعہ ‬ ‎, Sarak-e-Qila) is a road in the Old Walled City of Lahore, Pakistan. It is one of Lahore's most famous and historically significant roads. Fort Road is a popular tourist destination in Lahore with some of Lahore's most important historical buildings, restaurants and antique shops situated on it. 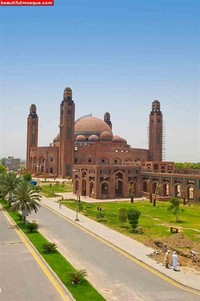 Grand Jamia Mosque Lahore (Urdu: گرینڈ جامع مسجد ‎) is a mosque located in Bahria Town, Lahore, Pakistan. With a capacity of 70,000 worshippers, it is the third largest mosque in Pakistan and the seventh largest mosque in the world. Designed by Nayyar Ali Dada, it was inaugurated on Eid al-Adha on 6 October 2014.

The Gulshan-e-Iqbal Park (Urdu: گلشن-اقبال پارک ‎) is a large park and recreational space in Lahore, Pakistan. With an area of over 67 acres (270,000 m 2), the park is one of the largest in the city. It is situated in the suburban locality of Allama Iqbal Town.

Hazuri Bagh (Urdu: حضوری باغ ‬ ‎) is a garden in Lahore, Punjab, Pakistan, bounded by the Lahore Fort to the east, Badshahi Mosque to the west, the Samadhi of Ranjit Singh to the north, and the Roshnai Gate to the south. 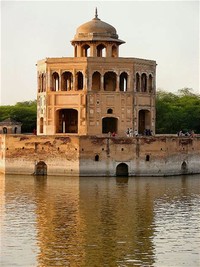 The Hiran Minar complex is located in the city of Sheikhupura, about 40 kilometres northwest of Lahore. The complex is located near the Sheikhupura Fort, which also dates from the early 17th century. Both sites are accessible from Lahore via the M2 Motorway, which connects Lahore to the Islamabad.

The Lahore Fort (Punjabi and Urdu: شاہی قلعہ ‬ ‎: Shahi Qila, or "Royal Fort"), is a citadel in the city of Lahore, Pakistan. The fortress is located at the northern end of Lahore's Walled City, and spreads over an area greater than 20 hectares. It contains 21 notable monuments, some of which date to the era of Emperor Akbar.

The Lahore Museum (Punjabi: لاہور میوزیم ‬; Urdu: ‎عجائب گھر لاہور ‬ ‎; “Lahore Wonder House”), is a museum located in Lahore, Pakistan. Lahore Museum was founded in 1865 during the British colonial period, and is now one of Pakistan’s most visited museums.

Lahore Zoo had its beginnings in a small aviary donated by Lal Mahundra Ram in 1872 to the Lahore Municipal Corporation. Over time the animal collection increased and the zoo expanded.

Largest walkthrough aviary of Pakistan is located in the Lahore Zoo Safari. Boating and fishing facilities have been developed near a lake. The lake is the biggest in the city, complete with four islands. There are also safari tracks in the lion and Bengal tiger areas, covering an area of 80 acres (32 ha).

The Lahore Fort (Punjabi and Urdu: شاہی قلعہ ‬ ‎: Shahi Qila, or "Royal Fort"), is a citadel in the city of Lahore, Pakistan. The fortress is located at the northern end of Lahore's Walled City, and spreads over an area greater than 20 hectares.

Minar-e-Pakistan (Urdu: مینارِ پاکستان‎ / ALA-LC: Mīnār-i Pākistān, literally "Tower of Pakistan") is a public monument located in Iqbal Park, adjacent to the Walled City of Lahore, in the Pakistani province of Punjab.

Mochi Gate (Urdu: موچی دروازہ ‬ ‎, Mochi Darwaza) is one of the historic thirteen gates of the Walled City of Lahore in Lahore, Punjab, Pakistan. Mochi Gate also serves as a union council located in the Ravi Zone.

Moti Masjid, one of the "Pearl Mosques", is a 17th-century religious building located inside the Lahore Fort. It is a small, white marble structure built by Mughal emperor Jahangir, and is among his prominent extensions to the Lahore Fort Complex. The mosque is located on the western side of Lahore Fort, closer to Alamgiri Gate, the main entrance.

Naulakha Pavilion. The Naulakha Pavilion (Urdu: نولکھا‎) is a white marble personal chamber with a curvilinear roof, located beside the Sheesh Mahal courtyard, in the northern section of the Lahore Fort in Lahore, Pakistan.

PIA Planetarium is a planetarium in Lahore, Pakistan run by Pakistan International Airlines. It was established after the establishment of PIA Planetarium, Karachi. It contains a dome building and a retired Boeing 720-047B (registration AP-AXL) standing in a park.

Annual horse racing competitions are held in this park. Lahore Race Club racecourse was initially at Jail Road, Lahore, the current site of Jilani Park. In 1976, Zulfikar Ali Bhutto's government asked the club to move its races away from the Jail Road course, but it remained there until 1980, when it was compelled to leave. Race Course Park was inaugurated by Lt General Ghulam Jilani Khan at that time Governor Punjab on 3rd October, 1985.

The Sheesh Mahal ("The Palace of Mirrors"; Urdu: شیش محل ‬ ‎) is located within Jahangir's Shah Burj block in northern-western corner of the Lahore Fort. It was constructed under the reign of Mughal Emperor Shah Jahan in 1631-32 by Mirza Ghiyas Begh, the grand father of Mumtaz Mahal, and father of Nur Jahan.

The Shahi Hammam (Urdu and Punjabi: شاہی حمام ‬; "Royal Baths"), also known as the Wazir Khan Hammam, is a Persian-style bath which was built in Lahore, Pakistan, in 1635 C.E. during the reign of Emperor Shah Jahan.

The Sheesh Mahal (Urdu: شیش محل ‬ ‎; “The Palace of Mirrors”) is located within the Shah Burj block in northern-western corner of Lahore Fort. It was constructed under the reign of Mughal Emperor Shah Jahan in 1631-32. The ornate white marble pavilion is inlaid with pietra dura and complex mirror-work of the finest quality.

The park is the ideal venue for a group outing. It does not matter if you are fifty people or five thousand, we can cater to any need you might have. Luxus Grand Hotel which is a sister concern and is our food and beverage partner for larger bookings. For Lunch boxes we have Sozo Grill which is an in house restaurant at Sozo Water Park.

There is a common perception about Lahore’s Taxali Gate area that it only comprises the red light district. There are several taboos associated with this gate which has a unique world hidden inside it. It is unfortunate that people have built up assumptions without getting an in-depth knowledge of the localities linked with heritage and culture.

The Tomb of Asif Khan (Urdu: مقبرہ آصف خان ‎) is a 17th century mausoleum located in Shahdara Bagh, in the city of Lahore, Punjab. It was built for the Mughal statesman Mirza Abul Hassan Jah, who was titled Asif Khan. Asif Khan was brother of Nur Jahan, and brother-in-law to the Mughal Emperor Jahangir.

The Tomb of Dai Anga, also known as the Gulabi Bagh, is a 17th century Mughal tomb complex located in the Mughal-era suburb of Begampura, outside the Walled City of Lahore, Pakistan.

The Tomb of Jahangir (Urdu: مقبرہُ جہانگیر ‬ ‎, Template:Lang-farsi) is a 17th century mausoleum built for the Mughal Emperor Jahangir. The mausoleum dates from 1637, and is located in Shahdara Bagh in Lahore, Punjab, Pakistan, along the banks of the Ravi River.

The Tomb of Nur Jahan (Urdu: مقبرہ نورجہاں ‬ ‎) is a 17th-century mausoleum in Lahore, Pakistan, that was built for the Mughal empress Nur Jahan. The tomb's marble was plundered during the Sikh era in 18th century for use at the Golden Temple in Amritsar.

Did Indian troops capture Lahore in 1965 war with Pakistan?
What are some interesting facts about Lahore?
Who financed Gaddafi Stadium in Lahore?
Lahore's cricket stadium is named after Muammar Gaddafi. Why?
What are the best seats in Lahore Stadium?
Are there any orphanages in Lahore, Pakistan?