Things to do in Paris, FR

From the top of the panoramic terrace, your eyes sweep over the whole of Paris. The revisited Antiquity. Architect Jean-François Chalgrin was inspired by the Roman Arch of Titus in a single arch, but went beyond it by exceptional dimensions (about 50 m high, 45 m long and 22 m wide) and abandoning columns. 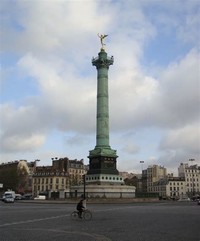 The Bastille (/ b æ ˈ s t iː l /; French: ) was a fortress in Paris, known formally as the Bastille Saint-Antoine. It played an important role in the internal conflicts of France and for most of its history was used as a state prison by the kings of France.

The Bois de Boulogne (French pronunciation: [bwa.d(ə).bu.lɔɲ]) is a large public park located along the western edge of the 16th arrondissement of Paris, near the suburb of Boulogne-Billancourt and Neuilly-sur-Seine. The land was ceded to the city of Paris by the Emperor Napoleon III to be turned into a public park in 1852.

The Canal Saint-Martin neighborhood is nestled between Gare du Nord and Republique in Northeastern Paris, in the 10th arrondissement. The canal feeds into the Seine River in the South and the Bassin de la Villette and the Canal de l'Ourq in the North.

The Catacombs of Paris (French: Catacombes de Paris, (help · info)) are underground ossuaries in Paris, France, which hold the remains of more than six million people in a small part of a tunnel network built to consolidate Paris' ancient stone mines.

Centre Georges Pompidou (French pronunciation: [sɑ̃tʁ ʒɔʁʒ pɔ̃pidu]), commonly shortened to Centre Pompidou and also known as the Pompidou Centre in English, is a complex building in the Beaubourg area of the 4th arrondissement of Paris, near Les Halles, rue Montorgueil, and the Marais.

The Champ de Mars (French pronunciation: [ʃɑ̃ də maʁs] ; English: Field of Mars) is a large public greenspace in Paris, France, located in the seventh arrondissement, between the Eiffel Tower to the northwest and the École Militaire to the southeast.

The lower part of the Champs-Élysées, from the Place de la Concorde to the Rond-Point, runs through the Jardin des Champs-Élysées, a park which contains the Grand Palais, the Petit Palais, the Théâtre Marigny, and several restaurants, gardens and monuments.

The Conciergerie (French pronunciation: [kɔ̃sjɛʁʒəʁi]) is a building in Paris, France, located on the west of the Île de la Cité (literally "Island of the City"), formerly a prison but presently used mostly for law courts. 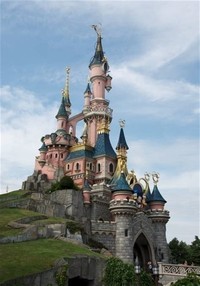 Disneyland Paris, originally Euro Disney Resort, is an entertainment resort in Marne-la-Vallée, a new town located 32 km (20 mi) east of the centre of Paris, and is the most visited theme park in all of Europe. 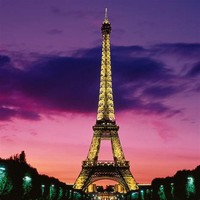 The Eiffel Tower (/ ˈ aɪ f əl / EYE-fəl; French: tour Eiffel [tuʁ‿ɛfɛl] ( listen)) is a wrought iron lattice tower on the Champ de Mars in Paris, France. It is named after the engineer Gustave Eiffel, whose company designed and built the tower. 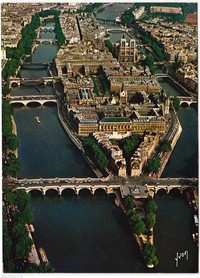 Ile de la Cité Few travelers and tourists visiting Paris, France, realize that the famous cathedral of Notre-Dame is actually situated on an island. The Ile de la Cité is usually referred to as the epicenter of Paris, as well as the original site of the Parisi tribes of the Sequana river, now known as the Seine.

The Île Saint-Louis (French pronunciation: [il sɛ̃ lwi]) is one of two natural islands in the Seine river, in Paris, France (the other natural island is Île de la Cité; the Île aux Cygnes is artificial).

The Jardin des plantes (French pronunciation: [ʒaʁdɛ̃ dɛ plɑ̃t]; French for 'Garden of the Plants'), also known as the jardin des plantes de Paris when distinguished from other jardins des plantes in other cities, is the main botanical garden in France.

The Jardin du Luxembourg, also known in English as the Luxembourg Gardens, is located in the 6th arrondissement of Paris, France. It was created beginning in 1612 by Marie de' Medici, the widow of King Henry IV of France, for a new residence she constructed, the Luxembourg Palace.

La Défense (French: [la de.fɑ̃s]) is a major business district, three kilometres west of the city limits of Paris. It is part of the Paris Metropolitan Area in the Île-de-France region, located in the department Hauts-de-Seine spread across the communes of Courbevoie, Nanterre, and Puteaux.

The Latin Quarter of Paris (French: Quartier latin, IPA: [kaʁtje latɛ̃]) is an area in the 5th and the 6th arrondissements of Paris. It is situated on the left bank of the Seine, around the Sorbonne.

Le Marais ("The Marsh", French pronunciation: ​) is a historic district in Paris, France. Long the aristocratic district of Paris, it hosts many outstanding buildings of historic and architectural importance.

Les Halles, which means what it sounds like, was one of the true wonders of working class Paris. Made famous by Emile Zola’s famous novel of the same name, it was nicknamed “the stomach" of Paris for obvious reasons, as well as the scale of it’s labyrinthine underground alleys selling fish, meat and vegetables.

The most notable tomb at Les Invalides is that of Napoleon Bonaparte (1769–1821). Napoleon was initially interred on Saint Helena, but King Louis Philippe arranged for his remains to be brought to France in 1840, an event known as le retour des cendres. 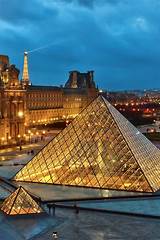 Montmartre (French pronunciation: [mɔ̃.maʁtʁ]) is a large hill in Paris's 18th arrondissement. It is 130 m (430 ft) high and gives its name to the surrounding district, part of the Right Bank in the northern section of the city.

Feast your senses on the vibrant color and charisma of the ‘Féerie’ show at Paris’ iconic Moulin Rouge during an extravagant evening in the City of Light. Take a seat in the atmospheric theater and prepare for a dazzling spectacle of drama, dance and music.

The Musée d'Orsay (French pronunciation: [myze dɔʁsɛ]) is a museum in Paris, France, on the Left Bank of the Seine. It is housed in the former Gare d'Orsay, a Beaux-Arts railway station built between 1898 and 1900.

Notre-Dame de Paris, also called Notre-Dame Cathedral, cathedral church in Paris, France. It is the most famous of the Gothic cathedrals of the Middle Ages and is distinguished for its size, antiquity, and architectural interest.

The Palais-Royal (French pronunciation: [pa.lɛ ʁwa.jal]), originally called the Palais-Cardinal, is a former royal palace located in the 1st arrondissement of Paris, France. The screened entrance court faces the Place du Palais-Royal, opposite the Louvre.

The monumental peristyle was inspired by the Pantheon commissioned by Agrippa in Rome. A decorative programme. From 1874 onwards, the sanctuary was decorated with paintings on canvas marouflé illustrating the life of Saint Geneviève and the epic story of the beginnings of both Christianity and the monarchy in France. The crypt.

The Parc de la Villette is the third-largest park in Paris, 55.5 hectares in area, located at the northeastern edge of the city in the 19th arrondissement.

Père Lachaise Cemetery (French: Cimetière du Père-Lachaise, [simtjɛːʁ dy pɛːʁ laʃɛːz]; formerly, cimetière de l'Est, "Cemetery of the East") is the largest cemetery in the city of Paris (44 hectares or 110 acres), although there are larger cemeteries in the city's suburbs.

The Place Charles de Gaulle, historically known as the Place de l'Étoile (pronounced [plas də letwal]), is a large road junction in Paris, France, the meeting point of twelve straight avenues (hence its historic name, which translates as "Square of the Star") including the Champs-Élysées.

Shared with the 4th, 11th and 12th arrondissements, the Place de la Bastille is one of Paris’ most famous squares owing its name to the historic fortress that once stood there. The vast square (215m by 150m) was the scene of many revolutions which had significant consequences to the history of France: 1789, 1830 and 1848. The Place de la Bastille is still today the French capital’s most important rallying point for demonstrations, marches and public celebrations.

The Place de la Concorde (French pronunciation: [plas də la kɔ̃kɔʁd]) is one of the major public squares in Paris, France. Measuring 8.64 hectares (21.3 acres) in area, it is the largest square in the French capital.

The Place des Vosges (French pronunciation: [plas de voʒ]), originally Place Royale, is the oldest planned square in Paris. It is located in the Marais district, and it straddles the dividing-line between the 3rd and 4th arrondissements of Paris.

Place Vendôme (French pronunciation: [plas vɑ̃dom]) is a square in the 1st arrondissement of Paris, France, located to the north of the Tuileries Gardens and east of the Église de la Madeleine. It is the starting point of the rue de la Paix.

The Pont Alexandre III is a deck arch bridge that spans the Seine in Paris. It connects the Champs-Élysées quarter with those of the Invalides and Eiffel Tower. The bridge is widely regarded as the most ornate, extravagant bridge in the city.

The Pont des Arts or Passerelle des Arts is a pedestrian bridge in Paris which crosses the River Seine.It links the Institut de France and the central square (cour carrée) of the Palais du Louvre, (which had been termed the "Palais des Arts" under the First French Empire

The Pont Neuf (French pronunciation: , "New Bridge") is the oldest standing bridge across the river Seine in Paris, France. It stands by the western (downstream) point of the Île de la Cité, the island in the middle of the river that was, between 250 and 225 BC, the birthplace of Paris, then known as Lutetia, and during the medieval period, the heart of the city. 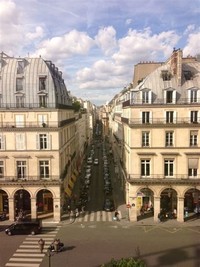 Rue de Rivoli (French pronunciation: [ʁy də ʁivɔli]) is one of the most famous streets in Paris, a commercial street whose shops include the most fashionable names in the world. 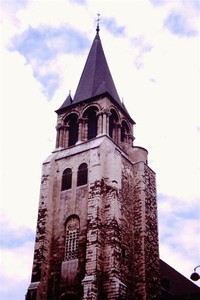 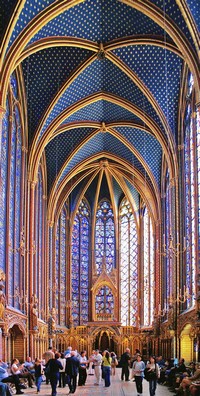 The Sainte-Chapelle (French pronunciation: [sɛ̃t ʃapɛl], Holy Chapel) is a royal chapel in the Gothic style, within the medieval Palais de la Cité, the residence of the Kings of France until the 14th century, on the Île de la Cité in the heart of Paris, France. 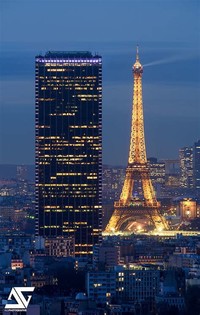 The Trocadéro (pronounced [trɔ.ka.de.ʁo]), site of the Palais de Chaillot ([pa.lɛ də ʃa.jo]), is an area of Paris, France, in the 16th arrondissement, across the Seine from the Eiffel Tower. The hill of the Trocadéro is the hill of Chaillot, a former village.

The Tuileries Garden (French: Jardin des Tuileries, IPA: [ʒaʁdɛ̃ de tɥilʁi]) is a public garden located between the Louvre and the Place de la Concorde in the 1st arrondissement of Paris, France.