How would you describe the culture of the Rio Grande Valley?

RGV is at least 95% hispanic. Over 50% of the 1 million residents speak Spanish. You can go anywhere in the country now and restaurants will attempt Mexican cuisine. Especially in Austin/Dallas/Houston some restaurants even get Tex-Mex right. read more

You might easily think that you were a few miles further south on the other side of the Rio Grande. At high school football games the cheerleaders would dance to a peppy Mexican tune and then lead the students in a cheer, in Spanish. read more

By Andrew E. Osegi The Rio Grande Valley, more commonly known as simply as “The Valley”, is located in the southernmost tip of Texas on the border of the Rio Grande River and Mexico. read more

The Rio Grande Valley is an area located in the southernmost tip of South Texas. It lies along the northern bank of the Rio Grande river, which separates Mexico from the United States. The four-county region consists of Hidalgo, Cameron, Willacy, and Starr counties. read more 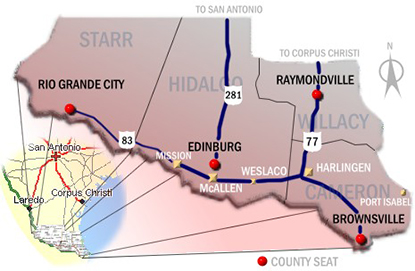