What do the names Nina, Pinta, and Santa Maria mean?

According to 'Christopher-Columbus-Five-things-you-thought-you-knew-about-the-explorer' the original names of the three ships were La Santa Clara, La Pinta, and La Santa Gallega. read more

Santa Maria "the gallician" a carrack owned by a spanish conquistador named Juan de la Cosa La Pinta "the painted one" and Santa Clara aka "la nina " "the girl". These caravels owned by the Pinzon brothers (Martin Alonso and Vicente Yanez). The owners were Spaniards and so their original nicknames were spanish. read more

As Columbus was the Admiral of the Fleet, Juan was the Captain of the Santa Maria. He would also accompany Columbus on his second and third voyages. "Pinta", meaning "Painted One", is thought to be a nickname for the second vessel. Her given name is no longer certain. The Pinta was a caravel. read more

Columbus' armada for that famous voyage consisted of three ships whose names are as famous as the Mayflower; the Nina, Pinta, and Santa Maria. We know they were tiny, never intended for trans-atlantic travel. read more 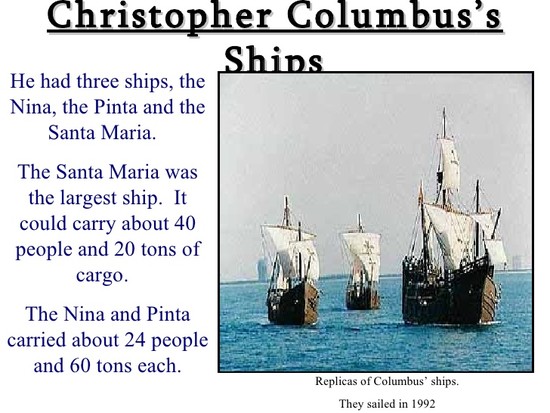