What is the difference between epistemology and logic?

Basically, logic and epistemology are two separate things, but logic is used a lot in most fields of philosophy, including epistemology. Epistemology asks questions about belief and justification and knowledge and things like that. Many of these questions can be sharpened with tools from logic. read more

Logic is useful in epistemology because it seems that the world follows some sort of logic. That is, we observe the world, and find patterns that we can describe with logic. The result could be said that logic+epistemology=ontology, the study of what things there are in the world. Logic and epistemology are otherwise completely independent. read more

When we combine the filters of epistomology, axiology, logic and metaphysics, it appears similar, in my view, of the “unified view of the universe” discussed by such notable figures as physicist, Professor Wolfgang Pauli and Swiss Psychologist Dr. Carl Jung. read more 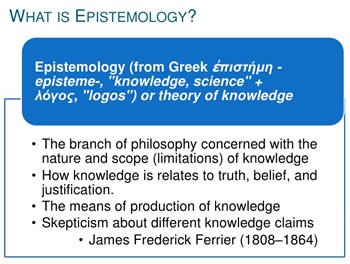