Which state in New England do you think is the best state?

The Best Pizza Places in San Diego. What do you think about when you hear the words "New England"? Lobster rolls? Funny accents? Baaahstin? Not much else? Yeah, me too. Which is why a trip to all six of the New England states this summer was as educational as it was fun. read more

I think Massachusetts is the best state. I think it has so much history and diversity. Boston is a great town to hang out and with so much to do and it has the Freedom Trail! read more

Nearly every New England state has their qualities. I love the vast wilderness of Maine, the skiing and beauty of Vermont, the history of Massachusetts along with the scenery of Cape Cod and the Berkshires, the quaint seaside towns of Rhode Island and the fun of Providence. read more

It’s New England’s only national park and the first Eastern national park in the nation. Amidst the 47,000 oceanside acres, you can hike granite trails, bike challenging paths (two-wheeling is a way-serious activity here), or climb Cadillac Mountain, often the first US locale to see the sunrise. read more

Of all the New England states, Rhode Island feels the most Midwestern; and that's probably because the Ocean State, like so many Rust Belt cities (Detroit, Cleveland) is redefining itself in a"post-manufacturing economy" -- a polite way to refer to decades of decline. read more

The New England state that you should live in is Massachusetts! You're a fast paced person who always wants to be on the go and trying new things. You hate feeling complacent or stuck, which would make this high octane state perfect for you. read more 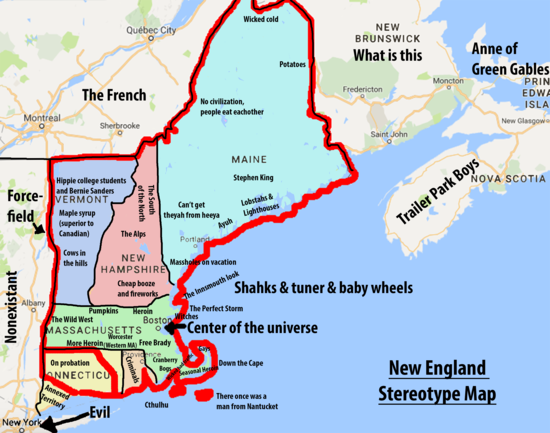