Why does the king of hearts in cards have a sword in his head?

Before the doctor could react, The king said, “They have shown me the truth of 13, and it is not meant for mortal eyes.” [referring to his own gambling problem I believe, but am not sure] Without hesitation the King proceeded to ram the blade in through the left side of his head until it came out the other side. read more

The simplest explanation is that the King of Hearts is a two dimensional representation. The sword is actually behind his head, not through it. read more

He's actually holding the sword BEHIND his head. The nickname "the Suicide king" comes from the optical illusion that it's through his head. Also, the designations of Charlemagne and Suicide King were both added long, long after the cards were originally created. read more 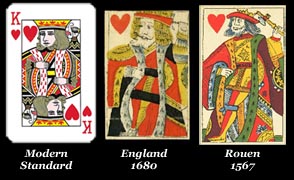