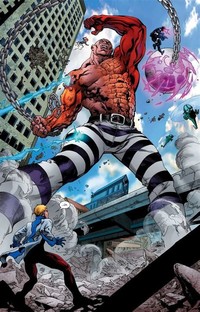 Now as the Absorbing Man, he was sent to battle Thor, but was defeated by overreaching his power by trying to absorb the entire earth and instead exploded. But to his powers, Creel was not truly dead and Loki magically reassembled his body. Since then he has battled Thor many times, as well as the Hulk and other superheroes. 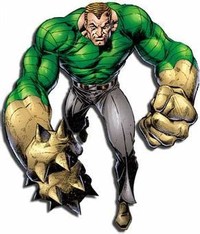 William Baker, better known as Flint Marko and his supervillain alias the Sandman, is a character and antagonist in Marvel Comics, typically serving as an enemy of Spider-Man. He is a supervillain who can control and manipulate sand. 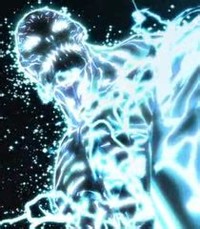 Zzzax is a supervillain from Marvel comics. It was created in a freak accident when an electromagnetic experiment exploded and absorbed the electronic impulses from the brains of nearby humans, killing them and giving the electricity sentience. 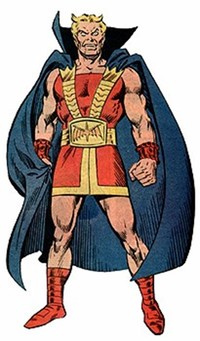 Tyrannus, AKA,Casper Clayton", is a Marvel Comics villain, and an enemy of the Hulk. Romulus Augustus was the last Roman emperor. Tyrannus believes that he was born to rule all.

The Red King first appeared overseeing a gladiator combat following the capture of the Hulk (who was exiled from Earth by the Avengers). Being impressed by the Hulk's strength, the Red King dons his gladiator armor to fight the Hulk in sword combat. Though the Red King receives a slash on his face, he was saved by his close right-hand Caiera.

The U-Foes are a team of supervillains in Marvel Comics. In an attempt to recreate the cosmic accident that transformed the Fantastic Four, Simon Utrecht, Ann and James Darnell, and Mike Steel flew into space and were bombarded with cosmic rays, giving them powers as well. 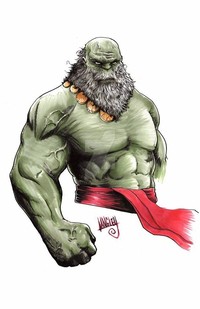 Maestro is an alternate-future version of the popular Marvel hero known as the Hulk, however he is a brutal tyrant who is stronger, more experienced and much more ruthless and sadistic than his current self - he was the chief antagonist of the Future Imperfect storyarc and was strong enough to snap the neck of the Hulk - temporarily paralysing the hero. 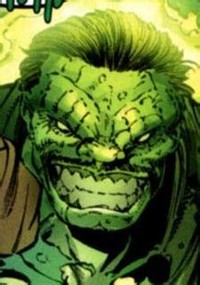 Brian David Banner was a villain in Marvel comics associated with the Hulk - he was Bruce Banner's abusive father and a murderer whose evil legacy lived on longer after his death. As a child, Brian and his mother were physically and emotionally abused by his father.

Abomination is later seen in The Raft, where all villains are taken in, but he breaks out and fights The Hulk again with Sabretooth's help. He is blinded by Wolverine, and Hulk defeats him once again.

The Leader (real name: Samuel Sterns) is an evil mastermind and gamma-mutated villain from the Incredible Hulk, a franchise produced by Marvel comics as innumerable cartoons, movies, videogames and of course comic books - the Leader is considered one of the main archenemies of the Hulk (sharing...