"Sorry" is a song recorded by Canadian singer Justin Bieber for his fourth studio album, Purpose (2015). Written by Bieber, Julia Michaels, Justin Tranter, Sonny Moore, and Michael Tucker; the song was produced by Skrillex and BloodPop.It was released on October 23, 2015, as the second single from the album.

Hello and welcome to my channel, I'm Adam, a lot of people remember me as SkyDoesMinecraft, I understand that's a huge part of my influence, but, after accum... 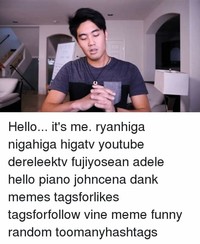 Please subscribe to my channel and my vlog channel! I make new videos here every Wednesday and make vlogs during my majestical daily life. JennaMarbles

Tune-in to YOU POSTED THAT? on YouTube.com/Smosh to watch as YouTubers like Gabbie Hanna, ... View 100+ more; This item has been hidden. You Posted That? Play all.