Cillian Murphy as The Scarecrow in “Batman Begins” (2005)

Jonathan Crane, also known as Scarecrow, is the secondary antagonist of Batman Begins. In the film, Dr. Jonathan Crane was the chief administrator at Arkham Asylum and was secretly working with both Ra's al Ghul and mob boss Carmine Falcone, who brought shipments of drugs in for Crane to use to create his Fear Toxin. 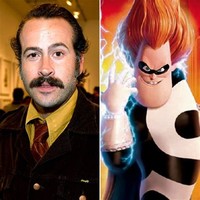 Syndrome (real name: Buddy Pine) is the main antagonist of Pixar's 6th animated feature film The Incredibles. He was the biggest fan of his idol, Mr. Incredible, until the latter denied him to be his sidekick when he was young.

Samuel is a villain from Fairy Tail. He is an Exceed and a member from the Legion Cops. Samuel is a blue athmophormic cat called Exceed. He is often seen with glasses.