Proponents of majority electoral systems claim that these systems have all of the advantages of a plurality system, i.e., simplicity, stability, and constituency representation. A majority system is relatively easy for the voter to understand.

Plurality voting is an electoral system in which each voter is allowed to vote for only one candidate, and the candidate who polls the most among their counterparts (a plurality) is elected. In a system based on single-member districts, it may be called first-past-the-post (FPTP), single-choice voting, simple plurality or relative/simple majority. 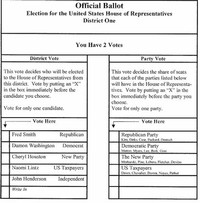