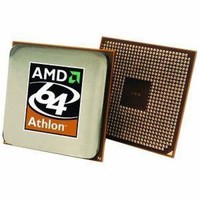 The Athlon 64 X2 is the first native dual-core desktop CPU designed by AMD. It was designed from scratch as native dual-core by using an already multi-CPU enabled Athlon 64, joining it with another functional core on one die, and connecting both via a shared dual-channel memory controller/north bridge and additional control logic.

As a budget processor, the Celeron does not support a dual processor configuration using multiple CPU sockets, however it has been discovered that multiprocessing could be enabled on Slot 1 Celeron processors by connecting a pin on the CPU core to a contact on the processor card's connector.

In multi-processor systems (more than one Opteron on a single motherboard), the CPUs communicate using the Direct Connect Architecture over high-speed HyperTransport links. Each CPU can access the main memory of another processor, transparent to the programmer.

Pentium 4 is a brand by Intel for an entire series of single-core CPUs for desktops, laptops and entry-level servers. The processors were shipped from November 20, 2000, until August 8, 2008. All Pentium 4 CPUs are based on the NetBurst architecture. The Pentium 4 Willamette (180 nm) introduced SSE2, while the Prescott (90 nm) introduced SSE3.

In March 2006, Intel launched the last Smithfield processor, the entry-level Pentium D 805, clocked at 2.66 GHz with a 533 MT/s bus. The relatively cheap 805 was found to be highly overclockable; 3.5 GHz was often possible with good air cooling.

The Pentium III was the first x86 CPU to include a unique, retrievable, identification number, called PSN (Processor Serial Number). A Pentium III's PSN can be read by software through the CPUID instruction if this feature has not been disabled through the BIOS.

The AMD Sempron CPU is designed to run more than 60,000 of the most popular software applications, so you can enjoy reliable performance for a wide variety of computing needs. And since the AMD Sempron CPU is compatible with leading PC peripherals, it helps keep everything running smoothly.