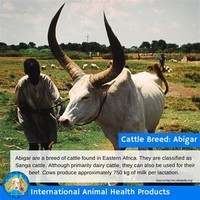 Abigar are a breed of cattle found in Eastern Africa. They are classified as Sanga cattle. Although primarily dairy cattle, they are also slaughtered for their beef. Cows produce approximately 750 kg of milk per lactation. The origin of Abigar cattle breed is found to be Gambella Regional State, especially the districts occupied by the Nuer people.

Achham cattle are a breed of zebu cattle found in the Achham region of Nepal. Achham cattle are a small breed less than 1 meter in height at the withers. Achhami cattle (Bos indicus) are in the list of unique flora/fauna of Nepal. They are suitable for hill conditions and low input systems, used mainly for milk production.

The Agerolese cattle are a breed of dairy cattle which are raised primarily for milk production. It is actually from the area of Agerola, in Campania in southern Italy. It derives from cross-breeding of indigenous Podolica cattle with Bruna Italiana, Italian Holstein-Friesian and Jersey cattle.

Alderney bull The Alderney was a breed of dairy cattle originating from the British Channel Island of Alderney, though no longer found on the island. The pure breed is now extinct, though hybrids still exist.

Planned breeding of Aulie-Ata cattle began in 1935 when collective breeding farms and state breeding stations were set up; local cows were initially crossed with East Friesian bulls and the crosses were raised under improved conditions of feeding and management.

The Australian Friesian Sahiwal, is an Australian breed of dairy cattle whose development commenced in the 1960s by the Queensland Government. It is a combination of the Sahiwal, a dairy breed of Bos indicus from Pakistan and Holstein breeds, designed for the tropical regions of Australia.

The Ayrshire cow is universally recognized as one of the most beautiful of the dairy cattle breeds, but much more important is the fact that she has been bred and developed to be a useful and profitable dairy cow.

Brown Swiss. Switzerland, The Native Home of the Brown Swiss breed of cattle, is a very rough and mountainous country with a total area of about 15,940 square miles.

The Burlina is a breed of cattle from the sub-alpine regions of north-east Italy. It is distributed mainly in the provinces of Treviso, Verona and Vicenza. : 12 It is a dual-purpose breed, but is raised principally for milk production.

Butana and Kenana breeds are part of the shorthorned Zebu group of breeds of eastern Africa. What makes them unusual is that they are dairy breeds, unlike other breeds like the Boran, Baggara, Fung, etc. The Butana breed is found to the east of Khartoum in central Sudan, in the Butana region.

The Chinese Black Pied or Chinese Black and White is a Chinese breed of dairy cattle. It derives from cross-breeding with local cows of black and white dairy cattle of various breeds imported since the 1870s from Canada, Germany, Japan, the Netherlands, the United Kingdom and the United States.

DENMARK - Impressed by what he saw on tour round a Danish Dairy farm, Stuart Lumb told TheCattlesite about what he learned regarding the technology and scale of Danish milking. Back in the 1960s the typical Danish farm had a combination of cropping, a herd of Danish Red cows and a herd of Danish Landrace pigs.

The Guernsey is a breed of dairy cattle from the island of Guernsey in the Channel Islands. It is fawn or red and white in colour, and is hardy and docile. Its milk is rich in flavour, high in fat and protein, and has golden-yellow tinge due to its high β-carotene content.

This was the cow that inspired the Illawarras, and the breeding programs began revolving around Red and Roan Shorthorns. In 1910, dairymen met at Kiama to establish another Herd Book, under the title Illawarra Dairy Cattle. In turn the first published Herd Book appeared in 1919.

Jamaica Hope (also known as Jersey-Zebu or Montgomery-Jersey) is a dairy breed of cattle originating from Hope Farm in Jamaica. The breeding started in 1910, and was an attempt to develop an animal that was adjusted to the climate of the island.

The Murnau-Werdenfels cattle are an old breed of cattle from Upper Bavaria, the southernmost part of Germany. It is a robust dairy cattle breed which is raised primarily for milk production. The breed originated in Tyrol, Austria and it is closely related to Braunvieh, Brown Swiss and Tyrolese Grey cattle.

The Tux-Zillertal, German: 'Tux-Zillertaler', is an endangered Austrian breed of domestic cattle. It was created in 1982 when two similar Alpine breeds, the Tux and the Zillertal, were merged.: 317 The two names derive from those of the municipality of Tux in the Tuxertal, and of the neighbouring Zillertal, both in the Tirol region of Austria.

Which are more valuable, dairy cows or beef cows, and why?
Is Jagtap Dairy really a dairy?
What happens to dairy cows when they are too old to give milk?
How well are dairy cows treated?
Were dairy cows bred or did they evolve?
How are cows treated in the Amul dairy?
Can a dairy farm of cows be profitable?
Whether cows or buffaloes which are good for dairy farming?
Are UK dairy cows milked during pregnancy?
When dairy cows become unproductive, are they used for meat?