Phoenicopterus ruber chilensis (Molina 1782) Phoenicopterus ignipalliatus Orbigny & Geoffroy Saint-Hilaire The Chilean flamingo (Phoenicopterus chilensis) is a large species of flamingo at 110–130 cm (43–51 in) closely related to American flamingo and greater flamingo, with which it was sometimes considered conspecific.

The lesser flamingo feeds in the pose characteristic of flamingos, with the long neck bent over and the bill upside down in the water. The tongue is pumped in and out to suck in the salty, alkaline water and mud. 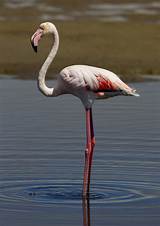 The greater flamingo (Phoenicopterus roseus) is the most widespread and largest species of the flamingo family. It is found in Africa, on the Indian subcontinent, in the Middle East, and in southern Europe