The crossguard lightsaber was an ancient lightsaber design that dated back to the Great Scourge of Malachor. It typically emitted three blades, a primary blade and two raw power vents known as quillons.

The curved-hilt lightsaber was a type of lightsaber utilized by the Jedi and the Sith during the Clone Wars. Its curved hilt design allowed the lightsaber duelist to slash and lunge at their opponent with greater precision.

The curved-hilt lightsaber, also called a dueling lightsaber, was a standard lightsaber design that was often seen during the prime of Form II lightsaber combat, both among the Jedi and Sith Orders. The degree of the curve at the top of the hilt in relation to the hand holds was the important factor.

The double-bladed lightsaber, also known as the saberstaff, was a lightsaber variant that featured a blade emitted from both ends. 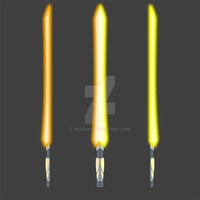 Dual-phase lightsaber was a special variant of lightsaber that used a combination of focusing crystals to create a blade that could extend up to double the original length with a simple activation.

Electrum was a type of purple and blue crystal found in the Anoat sector of the galaxy. Electrum first appeared in the mobile game Star Wars: Uprising, where it can be won from in-game events and is used to upgrade powerful gear and Crew Members. 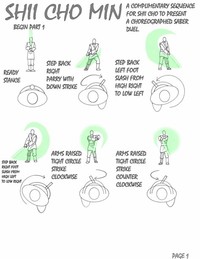 Form I, also known as Shii-Cho, The Way of the Sarlacc, or The Determination Form, was the first of the seven forms of lightsaber combat. This combat form was developed during the transitional period within the Jedi Order from ancient metal swords to more contemporary lightsabers.

Form III, also known as Soresu, the Way of the Mynock, or the Resilience Form, was the third of the seven classic forms of lightsaber combat that was recognized by the Jedi Council prior to and during the Clone Wars. Soresu was developed during the widespread emergence of blasters as an offensive weapon.

Form IV, also known as Ataru, the Way of the Hawk-Bat, or The Aggression Form, was the fourth of the seven forms of lightsaber combat. The history of Ataru stretched back through the Old Republic, to at least as early as the Mandalorian Wars, where it was commonly employed by Jedi of that day.

Form V, also known as Djem So or Shien (pronounced shee-ENN), was the fifth form of lightsaber combat used by members of the Jedi Order. Form V allowed a Jedi to deflect blaster fire back at an opponent, turning the Jedi's defense into an offensive action.

Form VI, also known as Niman, the Way of the Rancor, the Moderation Form, and the diplomat's form, was the sixth form of the seven forms of lightsaber combat. This fighting style was a hybrid martial art created by effectively combining elements of the preceding lightsaber forms into a single, generalized form.

Form VII, also known as Juyo, the Way of the Vornskr, or the Ferocity Form, was the seventh of seven forms recognized as canon for lightsaber combat by the last Jedi Council of the Old Jedi Order. 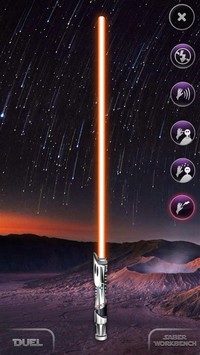 The lightclub, also known as a great lightsaber or greatsaber, was a weapon similar to a lightsaber. However, special focusing crystals and power systems enabled this rare lightsaber to project a blade up to three meters in length. 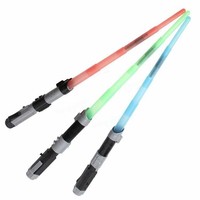 The lightsaber, sometimes referred to as a laser sword, was a weapon used by the Jedi, the Sith, and other Force-sensitives. Lightsabers consisted of a plasma blade, powered by a kyber crystal, that was emitted from a usually metal hilt. 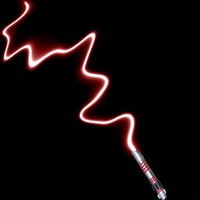 A lightwhip, also known as an energy whip or a laser whip, was a rare variation of the lightsaber. Lightwhips generally functioned on the same principles and mechanics as lightsabers, emitting a coherent beam of energy that was used as a weapon. 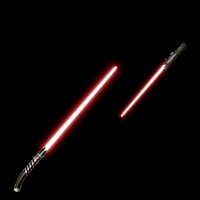 The lightsaber shoto, commonly referred to as simply shotos, but also known as short lightsabers or lightdaggers, were essentially miniaturized lightsabers, whose purpose was primarily to serve as an off-hand weapon for those duelists seeking to employ the twin-bladed technique of Jar'Kai, but were also utilized by those Jedi and Sith whose diminutive stature made wielding full sized lightsabers impractical, or, in some cases, impossible. 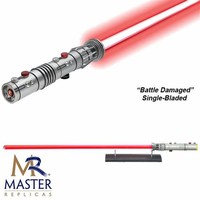 A standard lightsaber is a weapon associated with both the Jedi and the Sith. When not active, it looks like a handle, which is usually decorated to suit the individual who built it. Some choose to inlay theirs with precious metals or gems, while others are much more functional.

A standard lightsaber is a weapon associated with both the Jedi and the Sith. When not active, it looks like a handle, which is usually decorated to suit the individual who built it. Some choose to inlay theirs with precious metals or gems, while others are much more functional. All have a single button on the handle, which generates a sword-shaped beam of light when pressed (requiring a swift action). Another press of the button (and another swift action) turns off the beam.

Guard shoto (also referred to as lightsaber tonfa) was a rare perpendicular-gripped type of short lightsaber with a second handle extending from the main hilt at 90 degrees. Though it could be gripped by either hilt, when wielded by the perpendicular handle, it was especially useful at blocking other lightsabers.

Wrist Hilt. Another rare variation where the lightsaber is attached to the wrist instead of clipped to a belt. This makes it easier and faster to have the lightsaber ready since the weapon is always close at hand. It also makes concealing the lightsaber much easier, allowing for surprise attacks.