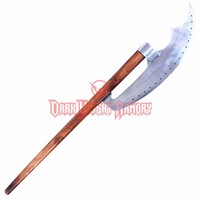 The bardiche was a poled weapon that had a slicing blade on the end. There were some important design aspects that made it a bardiche rather than some of the other type of bladed pole weapons. Typically the Bardiche blade was very long- as long as two feet.

The bill is a polearm weapon used by infantry in medieval Europe. The bill is similar in size, function and appearance to the halberd, differing mainly in the hooked blade form. 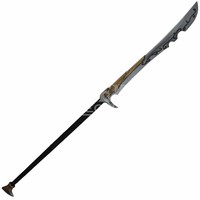 A glaive (or glave) is a European polearm, consisting of a single-edged blade on the end of a pole. It is similar to the Japanese naginata, the Chinese guandao and pudao, Russian sovnya and Siberian palma .

A guisarme (sometimes gisarme, giserne or bisarme) is a pole weapon used in Europe primarily between 1000–1400. Its origin is likely Germanic from Old High German "getīsarn", literally "weeding iron".

Halberd Medieval Weapon. A Halberd was a special kind of weapon which began to be used in parts of Europe in the 14th century and continued to be used until the 18th century. It had an unusual shape but it combined the elements of multiple weapons into a single weapon, making it highly effective and deadly in the hands of a good wielder. 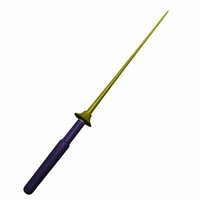 The lance is a pole weapon designed to be used by a mounted warrior or cavalry soldier . During the periods of classical and medieval warfare, it evolved into being the leading weapon in cavalry charges, and was unsuited for throwing or for repeated thrusting, unlike similar weapons of the javelin/pike family typically used by infantry.

The Lochaber axe took many incarnations, although all of them had a few elements in common. It was a heavy weapon, used by infantry for a defence against cavalry and as a pike against infantry. Like most other polearms of the time, it consisted of two parts: shaft and blade.

The Lucerne Hammer was a polarm weapon that was popular in Switzerland during the 15th thru 17th centuries. It gets the name "lucerne" from the place it was first discovered. Typically it is mounted on a pole that is around seven feet in length and it has a head with three parts: the stabbing point, the beaked spike and the hammer. 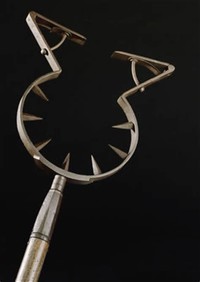 A man catcher is an esoteric type of pole weapon which was used in Europe as late as the 18th century. [citation needed] It consisted of a pole mounted with a two pronged head. Each prong was semi-circular in shape with a spring-loaded "door" on the front.

A fork is a pole weapon which was used in war in Europe between the 15th and 19th centuries. Like many polearms, the military fork traces its lineage to an agricultural tool, in this case the pitchfork.

A partisan (also partizan) is a type of polearm that was used in Europe in the Middle Ages. It consisted of a spearhead mounted on a long shaft, usually wooden, with protrusions on the sides which aided in parrying sword thrusts. 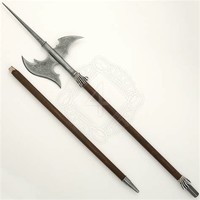 The pike was issued as a British Home Guard weapon in 1942 after the War Office acted on a letter from Winston Churchill saying "every man must have a weapon of some kind, be it only a mace or pike". However, these hand-held weapons never left the stores after the pikes had "generated an almost universal feeling of anger and disgust from the ranks of the Home Guard, demoralised the men and led to questions being asked in both Houses of Parliament". 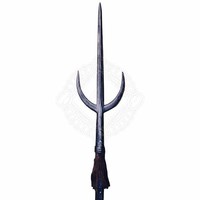 A look at the Ranseur, a medieval polearm weapon. Ranseur The Ranseur was a pole weapon comprised of a three pronged head mounted on a long wooden shaft. Typically the shaft was over six feet in length.

The following is a list of Wikipedia articles on types of weapons that were in use during the post-classical historical period (roughly between the mid 1st to mid 2nd millennia AD). 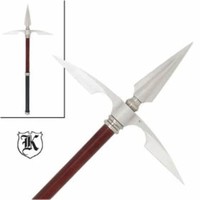 The following is a list of Wikipedia articles on types of weapons that were in use during the post-classical historical period (roughly between the mid 1st to mid 2nd millennia AD). 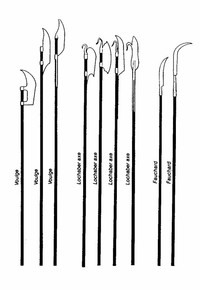 The Voulge was a polearm - a weapon head mounted on the end of a pole. Typically the pole for a voulge was six to eight feet long and the blade was as long as two feet. The voulge was mounted directlyl to the sides of the pole and it had a heavy head that was meant for hacking at an opponent. 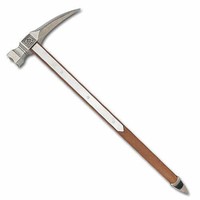 A war hammer is a late medieval weapon of war intended for close combat action, whose design resembles the hammer. Its appearance is similar to that of an ice axe. Originating in Europe and the Middle East, it was later introduced to Mughal India.

A war scythe or military scythe is a form of pole weapon with a curving single-edged blade with the cutting edge on the concave side of the blade.