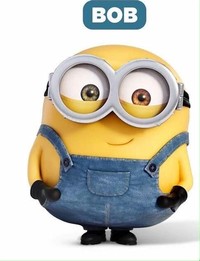 Minions. Bob was the only minion interested in Kevin's journey, after begging him he is able to join. On the way to their destination, Kevin carried him sometimes. Bob grew hungry halfway through the journey and tries to eat Kevin with Stuart, who has a hallucination that the minions are speaking bananas.

Carl is one of the Minions. Carl is a small, one-eyed minion with buzz-cut hair. He is seen wearing flashing lights on his head, and he has a megaphone that he says "Bee-do" in.

Jorge – The Fat Minion. Jorge is fat. He has standing straight-up hair. His height is 96cm, which is same as a seated Dave but slightly more than Stuart. He loves making photocopies of his bottom. Jorge is obviously not self-conscious about his waistline at all. 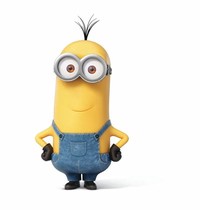 Phil is one of the Minions that appears in Despicable Me 2. He is voiced by Pierre Coffin. While Phil was vacuuming the foyer, the doorbell rang. Answering the door, he opens it to see Dr. Nefario, not realizing Gru's old henchman was there to kidnap him.

Stuart is an one-eyed short Minion with combed hair. In Despicable Me 2, he is seen dressed up as a girl after Gru is recruited by the Anti-Villain League and sent to Bake My Day to investigate. Stuart is one of the Minions and the tritagonist in Minions. 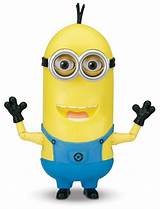 Tim is a tall two-eyed minion with a sprout hair cut. He is usually dressed conservatively, perhaps because he is a bit more mature than the other minions. In Despicable Me 2, he is bald and wears a tie.