The Congo peafowl (Afropavo congensis), known as the mbulu by the Bakôngo, is a species of peafowl native to the Congo Basin. It is one of three extant species of peafowl, the other two being the Indian peafowl (originally of India and Sri Lanka) and the green peafowl (native to Myanmar and Indochina). 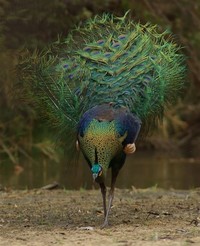 The Peacock Room, an 1877-room installation by James McNeill Whistler now located in the Freer Gallery of Art in Washington, D.C., prominently features paintings of green peafowl. Although the Burmese or grey peacock-pheasant is the national bird of Myanmar, the green peafowl was an ancient symbol of the monarchs of Burma.

The Indian peafowl or blue peafowl (Pavo cristatus), a large and brightly coloured bird, is a species of peafowl native to South Asia, but introduced in many other parts of the world. The male, or peacock, is predominantly blue with a fan-like crest of spatula-tipped wire-like feathers and is best known for the long train made up of elongated upper-tail covert feathers which bear colourful eyespots.