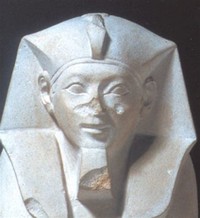 Ahmose I (Egyptian: Jˁḥ ms(j.w), sometimes written Amosis I, "Amenes" and "Aahmes" and meaning Born of Iah) was a pharaoh of ancient Egypt and the founder of the Eighteenth dynasty. He was a member of the Theban royal house, the son of pharaoh Seqenenre Tao and brother of the last pharaoh of the Seventeenth dynasty, King Kamose. 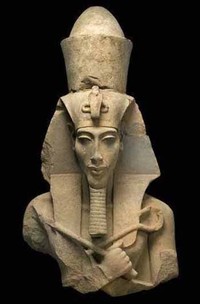 Akhenaten's name does not appear on any of the king lists compiled by later pharaohs and it was not until the late 19th century that his identity was re-discovered and the surviving traces of his reign were unearthed by archaeologists. 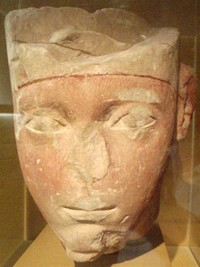 Amenhotep also built structures at Karnak for his Sed festival, a festival by which a pharaoh's strength and vigour was renewed after reigning 30 years, but it seems likely that he died before he could use them. 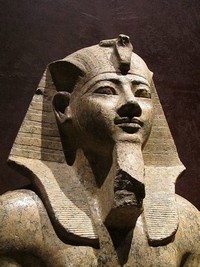 Amenhotep II (sometimes called Amenophis II and meaning Amun is Satisfied) was the seventh Pharaoh of the 18th dynasty of Egypt. 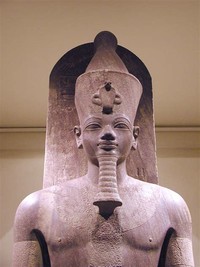 Amenhotep III (Hellenized as Amenophis III; Egyptian Amāna-Ḥātpa; meaning Amun is Satisfied), also known as Amenhotep the Magnificent, was the ninth pharaoh of the Eighteenth Dynasty. According to different authors, he ruled Egypt from June 1386 to 1349 BC, or from June 1388 BC to December 1351 BC/1350 BC, after his father Thutmose IV died. 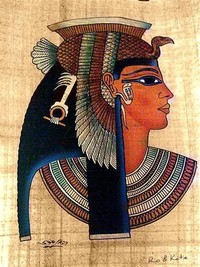 Cleopatra personally led several dozen Egyptian warships into the fray alongside Antony’s fleet, but they were no match for Octavian’s navy. The battle soon devolved into a rout, and Cleopatra and Antony were forced to break through the Roman line and flee to Egypt. 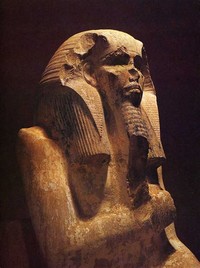 Djoser (also read as Djeser and Zoser) was an ancient Egyptian pharaoh of the 3rd dynasty during the Old Kingdom and the founder of this epoch. He is well known under his Hellenized names Tosorthros (from Manetho) and Sesorthos (from Eusebius). 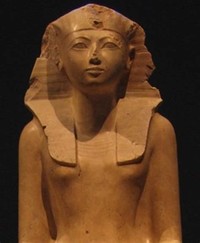 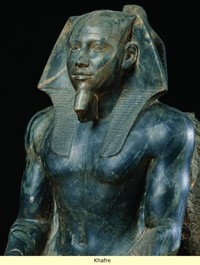 Khafra (also read as Khafre, Khefren and Greek: Χεφρήν Chephren) was an ancient Egyptian king of the 4th dynasty during the Old Kingdom. He was the son of Khufu and the throne successor of Djedefre. 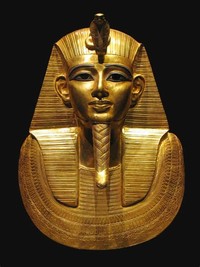 The identity of Menes is the subject of ongoing debate, although mainstream Egyptological consensus identifies Menes with the Naqada III ruler Narmer (most likely) or First Dynasty pharaoh Hor-Aha. Both pharaohs are credited with the unification of Egypt to different degrees by various authorities. 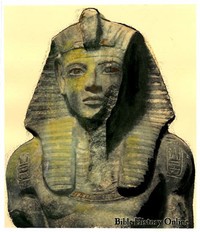 It is presumed that Merneptah also was married to Queen Takhat and one of their sons would become the later Nineteenth Dynasty pharaoh, Seti II. They also were the parents of prince Merenptah and possibly the usurper, Amenmesse, and Queen Twosret, wife of Seti II and later pharaoh in her own right. 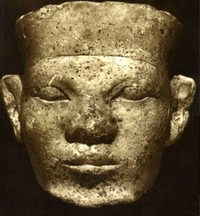 Narmer's identity is the subject of ongoing debates, although the dominant opinion among Egyptologists identifies Narmer with the pharaoh Menes, who is renowned in the ancient Egyptian written records as the first king, and the unifier of Ancient Egypt. 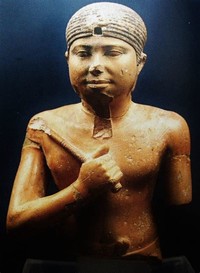 Neferefre held many names during his life, including: Ranefer; Neferre; Nefer-khau; Nefer-em-nebty; Netjer-nub-nefer; Izi; Lord of Stability; Modern historians believe Neferefre ruled for approximately two years. Inscriptions in his tomb speak of events during the second year of his reign. His estimated date of death is around 2458 B.C.

Ankhkheperure-mery-Neferkheperure/ -mery-Waenre/ -mery-Aten Neferneferuaten was a name used to refer to either Meritaten or, more likely, Nefertiti. The archaeological evidence relates to a woman who reigned as pharaoh toward the end of the Amarna Period during the Eighteenth Dynasty. 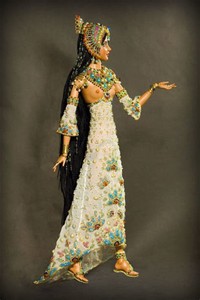 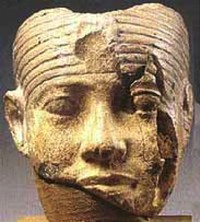 The Pyramid of Khafre and the Great Sphinx of Giza The Pyramid of Khafre or of Chephren (Arabic: هرم خفرع ‎, translit. haram ḵafraʿ, IPA: [haram xafraʕ]) is the second-tallest and second-largest of the Ancient Egyptian Pyramids of Giza and the tomb of the Fourth-Dynasty pharaoh Khafre (Chefren), who ruled from c. 2558 to 2532 BC.

Menpehtyre Ramesses I (or Ramses) was the founding pharaoh of ancient Egypt's 19th dynasty. The dates for his short reign are not completely known but the time-line of late 1292–1290 BC is frequently cited as well as 1295–1294 BC. 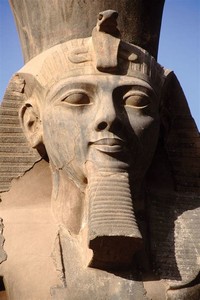 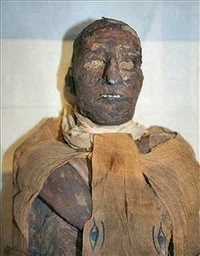 Usermaatre Ramesses III (also written Ramses and Rameses) was the second Pharaoh of the Twentieth Dynasty in Ancient Egypt. He is thought to have reigned from 1186 to 1155 BC and is considered to be the last monarch of the New Kingdom to wield any substantial authority over Egypt. 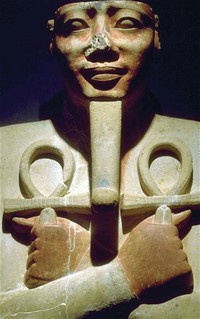 Senusret I, also anglicized as Sesostris I and Senwosret I, was the second pharaoh of the Twelfth Dynasty of Egypt. He ruled from 1971 BC to 1926 BC, and was one of the most powerful kings of this Dynasty. 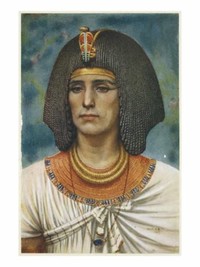 Menmaatre Seti I (or Sethos I as in Greek) was a pharaoh of the New Kingdom Nineteenth Dynasty of Egypt, the son of Ramesses I and Sitre, and the father of Ramesses II. 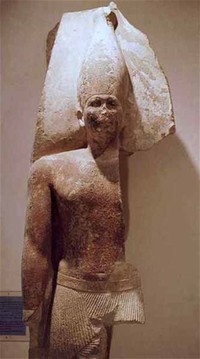 Sneferu (also read Snefru or Snofru) [citation needed], well known under his Hellenized name Soris (Greek: Σῶρις) (by Manetho), was the founding monarch of the 4th dynasty during the Old Kingdom. 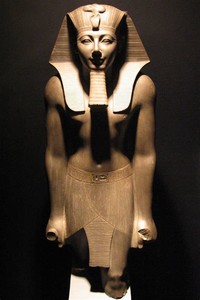 Thutmose III (sometimes read as Thutmosis or Tuthmosis III, Thothmes in older history works, and meaning "Thoth is born") was the sixth pharaoh of the Eighteenth Dynasty. 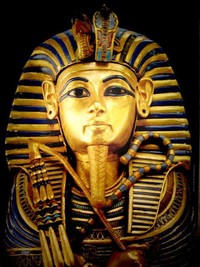 A separate exhibition called Tutankhamun and the World of the Pharaohs began at the Ethnological Museum in Vienna from 9 March to 28 September 2008, showing a further 140 treasures. Renamed Tutankhamun: The Golden King and the Great Pharaohs, the exhibition toured the US and Canada from November 2008 to 6 January 2013.

Queen Twosret Queen Twosret (Tawosret, Tausret) was the last known ruler and the final Pharaoh of the Nineteenth Dynasty. She is recorded in Manetho's Epitome as a certain Thuoris, who in Homer is called Polybus, husband of Alcandara, and in whose time Troy was taken. 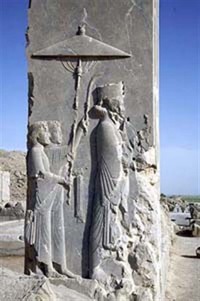 Xerxes I was the king of Persia between 486 and 465 B.C. He was born to King Darius I and Queen Atosa in 520 BC and was given the name Khashayar. Xerxes is the Greek transliteration of the name Khashayar shah, and it means "king of heroes." He was a part of the Achaemenid Dynasty. Xerxes I’s empire stretched from India to Egypt and parts of Europe.